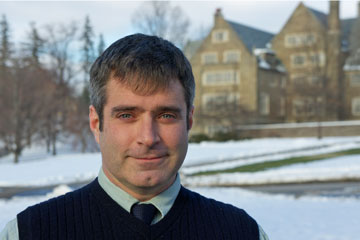 Today we are pleased to announce that David Wivell is joining the InitialView team as our Head of Secondary School Relations. Previously, David was the Director of International Admission at Northfield Mount Hermon School, one of the top boarding/day schools in New England. Northfield Mount Hermon is one the largest and most prestigious boarding schools in the U.S., and David was responsible for both one-on-one aspects of admission like interviews and information sessions (often conducted in Mandarin) as well as setting up a system to recruit, diversify and manage incoming international students. Most notably, he became an expert at ferreting out falsified application materials.

David will lead InitialView’s expansion of its unique service to boarding schools. The technology and pricing will be the same as InitialView's interviews for college admission. The unscripted video interviews will be free for schools, while families will pay a set fee of RMB 600 (approximately $95 USD). As part of the fee, InitialView will forward the interview to as many schools as requested by the family. For an additional charge of RMB 600, InitialView will also proctor a writing sample.

In our press release, David states: “While some secondary school solutions look similar, InitialView is the only one that has been proven at the college level. Good boarding schools are run very much like small colleges, and I know distinguished secondary schools will appreciate that InitialView is used by prestigious higher education institutions.”

“As I know from my personal experience, cost is a significant factor in deciding where to apply, and InitialView’s technology and scale allows us to charge a fraction of what competitors charge. We believe that secondary schools will welcome us as an alternative to much more expensive options.”

Prior to joining InitialView, David was a journalist for the Associated Press (AP) in Beijing, where he in recent years personally covered some of the biggest news stories of China.

David was among the first wave of young American students to study in China after it reopened to the outside world in the late 1970’s. He is fluent in Mandarin and has lived in China for about 16 years, and both he and his children have been educated by the Chinese school system.

We are thrilled to have David join our team. As always, we are eager to connect with you. We are reachable at any time at contact@initialview.com or at the phone numbers below. You may read the complete press release here.